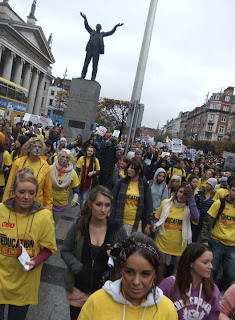 All the streets in the city center were filled with marching students in bright yellow. The cars and buses couldn't use the streets! 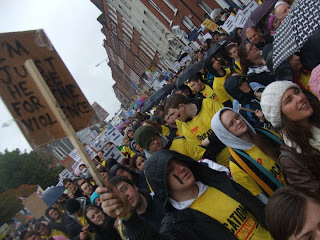 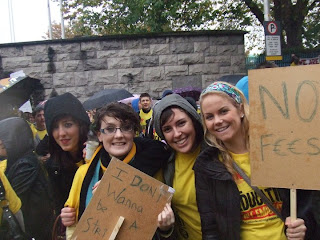 Her sign, and the back of mine, says 'I dont wanna be a stripper' haha

http://www.irishtimes.com/newspaper/frontpage/2010/1104/1224282635235.html
http://www.bbc.co.uk/news/uk-11689264
Yesterday, Nov 3rd, there was a huge student protest in the streets of the city center in Dublin. The Irish students (along with myself :D) were protesting the raise in fees and the 'brain drain'. The recession is really really bad in Irealnd and they are cutting jobs from the private and pubic sectors, so after people graduate from college there is no work for them so most of the new grads move to Australia or New Zealand.
It was crazy being apart of such a huge march, there was approximently 25,ooo students from all over Ireland. Now I know I'm not Irish so it doesn't affect me, but I know if a protest like this was happening in Cali I would want to be a part of it.
Posted by Justine Eve Toro at 7:53 AM